Hi Blog.  Today’s entry is a tangent.  Time for the world to do a major update on their view of Japan’s economy, with it’s famous land-price bellwether (land was once used as the ultimate collateral–since once upon a time land prices in Japan were seen as something that never went down, and it fueled the Bubble Economy).

From the country where, less than twenty years ago, the Imperial Palace Grounds were once rumored to be worth more than all of Canada, now we have land so cheap it’s free!  As long as you build and live on it.

This is apparently the first time this has happened here since the Oklahoma-style Hokkaido land grab during colonization about 150 years ago.  Pretty impressive, and a sea-change in attitude.  Especially as the exodus from the countryside continues, the ruralities empty, and entire communities die out.  However, it turns out, Shibetsu is being oddly fussy–refusing NJ who do not have PR.  Can it afford to be picky like this?

Arudou Debito in Sapporo (where the land is definitely not free)

Despite Land for the Taking, No Cry of Northward Ho

SHIBETSU, Japan — “If you build a home and move here, the land is yours free,” read a billboard on the side of a quiet two-lane highway that disappeared straight into the horizon here, under northern Japan’s big sky. 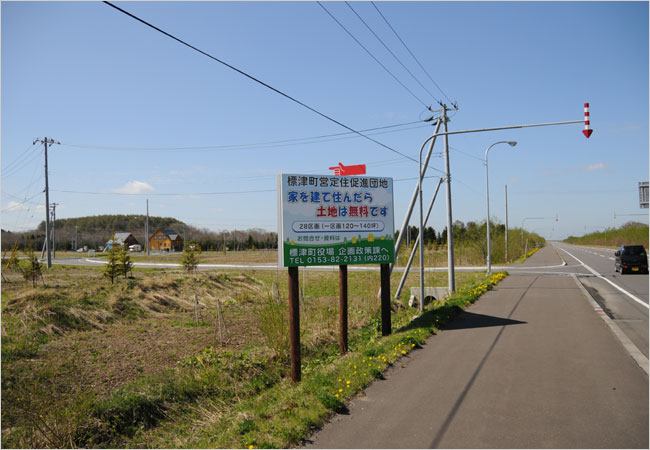 A roadside billboard in Shibetsu, Japan, which is trying to stem population loss, reads: “If you build a home and move here, the land is yours for free.”

An orange hand atop the billboard pointed to a large, empty tract of flat land on which three new houses stood, surrounded by nothing.

Yellow stake signs dotted the land. Some displayed the name of a future settler, like a certain Inehara-san from Hyogo prefecture on lot B-9; others, only the details of a piece still up for grabs, including the 4,300 square feet on B-11.

Desperate to stanch a decline in population, this town and another on Hokkaido, the northernmost island in Japan, are trying to lure newcomers with free land. It was a back-to-the-future policy since Hokkaido was settled by Japanese drawn here by the promise of free land in the late 19th century, a time when Japan was growing and modernizing rapidly.

Since 1998, Hokkaido, like the rest of rural Japan, has been losing its residents to cities and old age. Significantly, just as Hokkaido’s earlier development resulted from Japan’s expansion, the decline in its population presaged the new era of a shrinking Japan, whose overall population started sliding in 2005.

Towns like Shibetsu — on Hokkaido’s eastern coast, so far east of Tokyo that the sun rises at 3:30 a.m. this time of the year because of Japan’s single time zone — have been hardest hit. Outside the small town center, few cars could be seen on the roads the other day. The open, flat land characteristic of Hokkaido, in sharp contrast to the densely packed mountains elsewhere in Japan, merely emphasized the area’s emptiness.

“If you think of it in American terms, this is like a Wild West town you see in movies or on television,” said Hiroaki Matsui, 50, a truck driver born here. “But even in America’s Wild West, this would be the remotest of all towns.”

Mr. Matsui supported the policy of giving away land but wondered whether newcomers, used to the comforts of modern Japan, were ready to move to an isolated town where winter temperatures drop to minus 4 Fahrenheit. “Will they really come here?” he asked incredulously.

In the United States, depopulated communities in the Great Plains have been giving away land in recent years. But in Japan, where a population more than 40 percent the size of the United States’ is squeezed into a country the size of California, offering free land seemed like an extreme measure.

“Land is cheap in Hokkaido,” said Akira Kanazawa, the mayor of Shibetsu, adding that many communities on the island were trying to attract new residents by offering rebates on land. “But free? That’s highly unusual.”

Because of a hollowing out of Shibetsu’s main industries, dairy farming and fishing, the town’s population has fallen by more than 10 percent in the last decade, to 5,889 today. So in late 2006, the town announced that it would give away 28 parcels of land ranging from 4,300 square feet to 5,230 square feet each, very generous by Japanese standards. A third of the lots were reserved for locals, with the rest going to outsiders.

The only stipulation was that the newcomers build a house on the lot within three years and move there officially.

Town officials had expected a big response. “But it wasn’t as simple as that,” the mayor said. “After all, it’s a huge commitment to migrate here.”

So far, only 11 families or couples, five from outside Hokkaido and six from within, have taken up Shibetsu’s offer, leaving 17 unclaimed lots. Locals now live in two finished houses; a third, to be occupied by a couple from Osaka, is under construction.

For centuries, the island was inhabited only by Ainu, an indigenous group, and was too cold to grow rice. But in the decades following Japan’s forced opening by the United States in the mid-19th century, Tokyo pressed to expand north, especially to counter growing Russian influence in the region.

The Hokkaido Colonization Board was established in 1869, guiding the migration of Japanese who displaced the Ainu and leading to the island’s acquisition by Japan. That migration was the first step in a movement that would send Japanese migrants to Hawaii, North and South America, and, with the growth of Japanese militarism, to Manchuria and other corners of Asia. As land grew scarce on the other Japanese islands, mostly second- or third-born sons who would not inherit any land back home arrived on Hokkaido with a frontier spirit, heeding the government’s call to develop the new land.

“That’s because back then Hokkaido was the only place in Japan with available land,” said Koichi Miura, a local historian in Yakumo, a town in southern Hokkaido that is also offering newcomers free land. He said that each settler then was given about 30 acres.

The lots being handed out this time in Yakumo are far smaller, roughly the size of those being given away in Shibetsu. In addition, unlike the earlier settlers, today’s tend to be older, with many deciding to move here for retirement. Town officials said that even if the newcomers were retirees, the economic benefits to the towns would outweigh the costs.

Toshiaki Nakamura, 48, who is scheduled to move here from Tokyo in the fall with his wife and daughter, said he wanted to escape the stress of Tokyo and was drawn by the nature on Hokkaido. Over the years, he and his wife, Toyomi, 52, had come to Hokkaido many times on vacation and decided to move here last fall after looking at three other locations on the island.

The land giveaway was also a factor. “It made me think how much those local governments are hurting as Japan’s population declines,” Mr. Nakamura said.

The couple planned to sell their Tokyo home, built on 1,200 square feet, and were making plans for a new house on their 5,000-square-foot lot here.

13 comments on “NYT on free land in Hokkaido (yes, you read that right)–but in one place only for citizens and NJ with Permanent Residency”