Hi Blog.  I have some good news to report.  After years of pressure on the GOJ to act like its fellow advanced societies in terms of divorce and child custody, Japan earlier this week signed the Hague Convention on Child Abductions.  Good.  I will comment more after the BBC article: 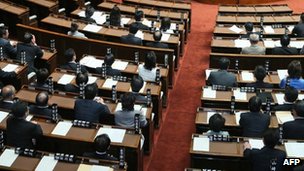 Japan’s parliament has voted to adopt an international treaty on child abductions, after years of pressure from Western countries.

Japan is the only country out of the Group of Eight industrialised nations (G8) yet to ratify the convention.

Its policies have been blamed for making it easy for Japanese mothers to remove children from foreign fathers.

Parents who have had their children abducted and taken to Japan by ex-spouses have describe the country as a “legal black hole” into which their children disappear, the BBC’s Rupert Wingfield-Hayes reports from Tokyo.

In February, Japanese Prime Minister Shinzo Abe expressed his support for the treaty after meeting US President Barack Obama.

The upper house of parliament voted to join the treaty on Wednesday. The lower house, which is more powerful, approved the treaty last month.

The government will ratify the treaty after finalising domestic procedures, including setting up a central authority responsible for locating abducted children and helping parents settle out of court where possible.

Japan says it aims to ratify the treaty by March 2014.

The 1980 Hague Convention on the Civil Aspects of International Child Abduction aims to protect the rights of both parents in custody cases.

“When I said I wanted to see [my daughter] on weekends, the judge and the attorneys in the room laughed” — Paul Toland, US Navy Commander

It seeks to ensure that custody decisions are made according to the laws of the country which provided the first residence for the children.

Under the convention, children who are taken away by a parent following a marriage breakdown must be returned to the country where they normally reside, if requested by the other parent.

However, campaigners say little will change until Japan reforms its own archaic divorce laws, our correspondent reports.

Japan’s family courts normally grant custody to one parent – traditionally the mother – after a divorce.

That parent is under no obligation to give the other parent access to the child, and it is not unusual for one parent to be cut out of their children’s lives forever.

One high-profile case is that of US Navy Commander Paul Toland, who lost custody of his daughter Erika after his marriage with his Japanese wife broke down.

“The [family] court completely avoided any discussion regarding visitation with Erika,” he said in a statement in 2009.

“When I said I wanted to see Erika on weekends, the judge and the attorneys in the room laughed.”

He was unable to regain custody after his ex-wife killed herself – instead, his daughter now lives with her maternal grandmother, who Cdr Toland said in his 2009 statement had refused to allow access.

In 2010, the ambassadors of 12 countries, including the US, UK, Australia and Germany, signed a joint statement urging Japan to adopt the 1980 Hague Convention.

However, critics of the convention have previously argued that it could make it harder for Japanese women to flee abusive relationships abroad.

COMMENT:  I don’t want to dismiss this development out of hand, because Japan doing this is a step in the right direction (after all, if even after this I had nothing good to say, then what would EVER count as good news on Debito.org?)  But as I have argued before, I think it’s been signed because enough time has passed for caveats to be put in place — so that the home team will rarely lose a custody case in Japan (furthermore, part of the argument for signing has been that Japanese would have a stronger footing overseas to pursue custody cases in Hague signatory countries — again, benefiting the home team in either case).  After all, the normalized portrayal in Japanese media of NJ as violent spouses, and Japanese as victims (particularly wives, even though they are the great minority in international marriages) has expanded Japan’s definition of “Domestic Violence” to even simple heated arguments.  Fight with your J-wife anytime and lose your kids. The deck is stacked.

Let me quote one submitter:  “From May 13’s Japan Times.  A series of articles hammering home what will evidently be Japan’s final word on the subject, that Japanese fleeing countries abroad are doing so to protect their kids and themselves from angry, violent, abusive foreign husbands.  Cue standardized quotes from proclaimed “expert on the issue” Kensuke Onuki as well as lawyer Mikiko “I was for the convention but now I see it conflicts with Japanese culture” Otani and a slew of heart-wrenching stories of Japanese wives fleeing abusive marriages (one claiming that had Japan been party to the Hague Convention at the time of her escape she would have chosen killing her child and herself than risk a return to her husband.  Whether these individual stories have merit of not, it’s pure one-sided sensationalism.  Where are the Murray Wood stories of wife abuse and neglect?
http://search.japantimes.co.jp/cgi-bin/nn20100514f1.html
http://search.japantimes.co.jp/cgi-bin/nn20100514f3.html
“Only Minoru Matsutani’s article sandwiched between offers any sense of balance.”
http://search.japantimes.co.jp/cgi-bin/nn20100514f2.html

And to quote another anonymous legally-trained friend:  “How to address DV is an issue in all Hague countries. In addition to allegations of DV, the Japanese legislation will also allow a judge to consider whether it would be difficult for EITHER the taking parent OR the parent requesting return to raise the child in the country of origin.  This sounds awfully close to a full-blown custody determination, which is sort of what courts are NOT supposed to do in Hague cases.”

As for future prospects, I shall defer to the better-informed judgment of a specialist international lawyer in this field, who wrote the following shortly before the Hague was signed:

Japan has not yet ratified the Hague Abduction Convention. The Japanese Cabinet has today reportedly approved the ratification but the necessary legislation has not yet been passed by the Japanese Diet (Parliament).

The issue of Japan’s joining the Hague Convention is still controversial in Japan. Many members of the Diet are flatly opposed to the treaty on the ground that it will lead to the imposition of “Western thinking” on family relationships in Japan, i.e. that it might lead to the intervention of the courts into the private life of families, to the issuance of judicial orders concerning family matters that can be enforced by the power of the state, and to both parents having meaningful rights to their children after a divorce or separation.

Accordingly, newspaper editorials in Japan have demanded that, when Japanese wives “flee” foreign countries because of alleged domestic violence abroad, they must not be forced to return to the country where such abuse has occurred.

Such concerns have already led to inclusion of a provision in the draft legislation that is most likely to lead to an unnecessarily broad interpretation of the “grave risk” exception in Article 13(b) of the Convention. Indeed, that is the intended result.

The result of such an exception would be to shield abductors who are able to claim domestic abuse even though:

Mediation is generally an extremely unhelpful forum for foreigners in family law cases in Japan, since (i) foreign parties must appear in person regardless of their place of residency, (ii) the sessions are usually short and are repeatedly adjourned for lengthy periods of time, necessitating multiple inconvenient and expensive visits to Japan, (iii) the foreigners’ views are generally misunderstood for language and cultural reasons, and (iv) the foreigners are pressured to accept unfair terms since there is no enforcement of court decisions in family law matters in Japan and because they are told that their refusal to accept the mediators’ recommendations will be held against them in a trial.

Meanwhile, the Japanese public is being told that even if Japan signs the Convention, “The return of a child can be denied if the parent seeking it is believed to abuse the child or have difficulties raising him or her.” Daily Yomiuri, Mar. 16, 2013. If that is the gloss that Japan intends to put on the Hague Convention – even though the Convention is expressly designed to secure the expeditious return of all abducted children except in extremely unusual cases – there is little or no point in Japan’s purported ratification of the treaty.

The result of Japan’s ratification of the Convention will likely be to create the appearance of Japan’s compliance with international norms but without any of the substance.

CONCLUSION:  Same as other treaties that Japan has signed but doesn’t enforce, I think the Hague will wind up as a historical footnote as another treaty Japan chooses to ignore.  When we see the highly unlikely prospect of children of international marriages abducted to Japan sent back overseas by a Japanese court (in contrast to other judiciaries that DO repatriate children, see for example here and here) then I’ll think progress has been made.  But it’s pretty inconceivable to me, since child abduction happens between Japanese couples too thanks to Japan’s insane marriage system, and it’s hard to imagine foreigners suddenly being granted more rights in Japanese marriages than fellow Japanese.  Arudou Debito

10 comments on “Good news: GOJ signs Hague Child Abductions Treaty. Bad news: GOJ will probably caveat its way out of ever following it”